“Is It O.K. to Kill Cyclists?” And how can we change that?

Posted on November 18, 2013 by jmirandolamullen

That’s what Daniel Duane asks in his opinion piece in The New York Times last Sunday.

Duane rightly points out that cyclists do not have adequate protections under traffic laws in the United States. Leah Shahum, executive director of the San Francisco Bicycle Coalition, admitted to Duane, “We do not know of a single case of a cyclist fatality in which the driver was prosecuted, except for D.U.I. or hit-and-run.” 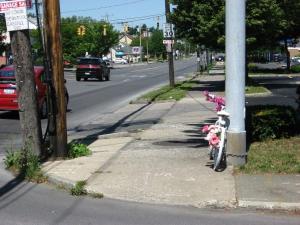 Fortunately, New York is one of four states that has passed Vulnerable User Laws, which  can help place “extra responsibility on drivers to avoid harming cyclists and pedestrians.” New York City DOT has also been proactive in implementing complete-street designs, but vocal opposition to increasing bike lines still remains.

Duane’s piece reminds us that regardless of your stance on bike lanes, the consequence of inadequate legal protections for cyclists is often death. Isn’t preventing those deaths something we can all get behind?

Lawmakers agree. For more on this, and what you can do to help, see the League of American Bicyclists’ coverage of the Bike and Ped Safety Act, introduced in both houses of Congress last week.

This entry was posted in Uncategorized. Bookmark the permalink.